In addition, John Scott farms at Balkissock near Ballantrae. He established the Ayrshire Farmers Market in 1999, founded the Scottish Association of Farmers  in 2001 and chaired the Ayrshire and Arran Farming & Wildlife Advisory Group (FWAG) from 1993-99. He is also a past chairman of the National Farmer’s Union of Scotland Hill Farming Committee.

Ayrshire-born John was educated at Barrhill Primary, George Watson’s College and has a BSc in Civil Engineering from Edinburgh University.

His interests include curling, geology and rugby – John played for Wigtownshire RFC from 1969-73.

He was appointed as the spokesperson for sustainable development under party leader Ruth Davidson's Shadow Cabinet team. 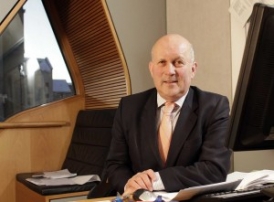 Convenor of the Delegated Powers and Law Reform Committee

Member of the Standards, Procedures and Public Appointments Committee

CPG on Towns and Town Centres