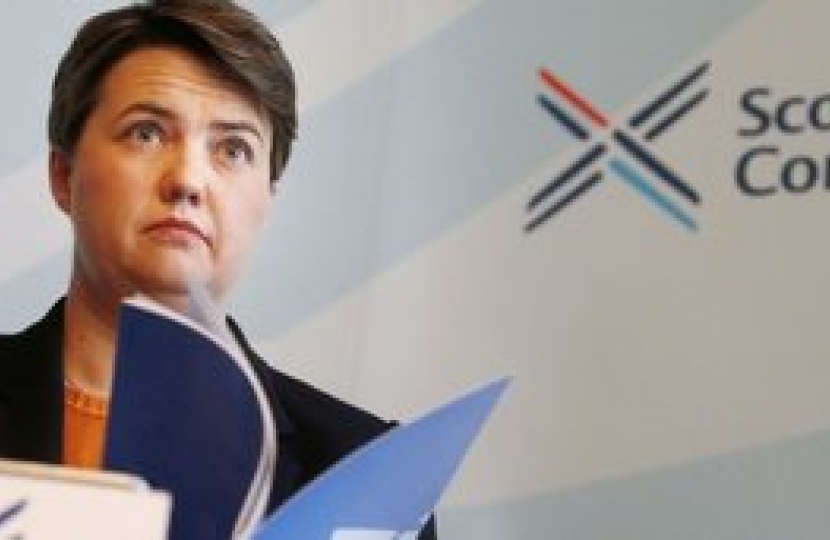 The Scottish Conservatives today launched our proposals for strengthening devolution after the referendum in September. If Scotland votes to remain in Britain, a raft of reforms have been proposed to further our devolved settlement in the document drafted by a team of economists, business leaders, academics and politicians; led by Lord Strathclyde.

The Scottish Parliament should be handed full powers over income tax, according to a report commissioned by the Scottish Conservatives.

In the key recommendation of the Strathclyde Commission – set up by party leader Ruth Davidson MSP last year – the report says that the setting of rates and bands in Scotland should be decided by MSPs.

The report also concludes that there is a case for a share of Scottish VAT receipts being assigned to the Scottish Parliament.

It adds that all barriers should be removed from Holyrood supplementing UK benefits out of its own budgets.

The findings contained in the “Commission on the Future Governance of Scotland” are unveiled today in Glasgow by Lord Strathclyde, chairman of the Commission.

The report declares that all the recommendations are based on “strong Conservative principles of responsibility, transparency and accountability, which we believe are required for a sustained relationship of all four parts of the UK”.

The report says there should also be Scottish versions of the Personal Tax Statements sent from HMRC, highlighting the taxes under the control of the Scottish Parliament.

On income tax, the report concludes that the tax-free personal allowance should remain a reserved issue for Westminster. After that, however, it would be up to the Scottish Parliament to decide on both rates and bands.

And it backs the creation of a new independent Scottish Fiscal Commission, which would be responsible for producing official macro-economic and fiscal forecasts in Scotland.

The report also proposes that Holyrood should be given more responsibility on some welfare issues.

Where a particular cash benefit is closely related to a devolved policy area, there is a stronger case for Scotland having more control.

Examples would include housing benefit and attendance allowance, which is paid to disabled people aged 65 or over who need help with personal care.

With substantial new powers, the Commission believes a range of reforms are needed at Holyrood to improve legislative scrutiny.

It recommends that the chairs of powerful Holyrood committees such as finance should come from opposition parties to give stronger checks and balances.

Finally, with such a major transfer of new powers the report recognises that relations must improve between the various parliaments and assemblies throughout the United Kingdom.

To help achieve this, it calls for a committee representing all the legislatures to be created to shape the future of the UK.

Following on from the announcement, the Prime Minister said:

“I welcome the report from Lord Strathclyde and his fellow commissioners.

“They have produced a clear, coherent and Conservative blueprint for the next stage of Scotland’s devolution journey.

“All the mainstream pro-UK parties believe in further devolution, so whilst we would want to build consensus for a set of measures and legislation, there is no reason why these changes shouldn’t happen early in the next Parliament.

“We want to make the Scottish Parliament more responsible for the money it spends – these are real powers with real consequences.

“We can now say clearly that, with a No vote this September, Scotland can have the best of both worlds; a strong and responsible Scottish Parliament underpinned by the security of the whole United Kingdom.”

To view the summary of the Strathclyde Report, click here.